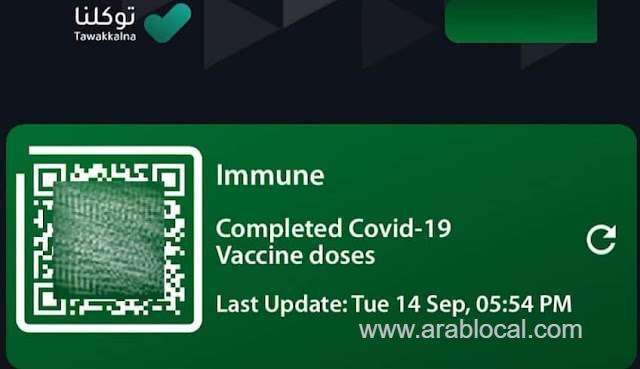 The Tawakkalna application in Saudi Arabia confirmed that the date of the second dose of the Corona vaccine cannot be canceled, explaining the possibility of rescheduling it, after one of the beneficiaries inquired, asking, “How do I cancel the appointment of 2nd dose?

The official account of the Tawakkalna customer care responded it through Twitter stating, “Cancellation of the vaccine appointment is possible before taking the first dose with specifying the reason, and after the first dose, the second dose cannot be canceled, but it can be rescheduled.”

- "After booking an appointment to receive the Corona vaccine, an appointment ticket will appear, showing personal data and appointment data with a QR code, as well as attending the appointment and sticking to the instructions", added Tawakkalna platform.

- Tawakkalna app concluded stating, "Entry into commercial, government, workplace communities will not be allowed except for those in health immune, recovered, first-dose immune, excluded."

The Tawakkalna app announced that a moving frame has been added around the status barcode in order to prevent any health frauds. This steps from the platform comes after few people used clever photoshopping and other methods to commit health status frauds.

- The moving frame around the status barcode indicates that the immune status is current in the Tawakkalna app.

- One of such attempts was taking a screenshot of the vaccination status and presenting it to the security while entering at shopping malls, commercial centers retail stores.