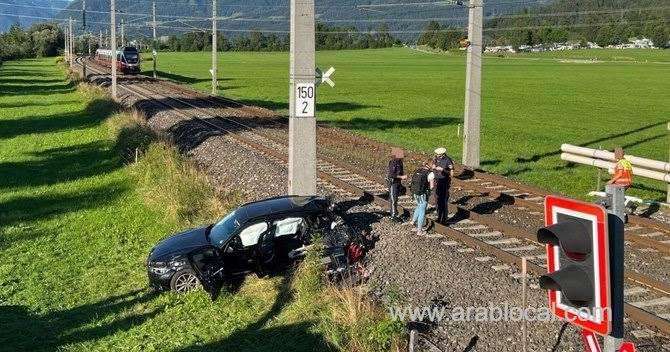 Local media reported that a Saudi citizen, 35, died in a train crash in Austria after saving his wife and two children.

A train collided with the family car that got stuck on the tracks while trying to pass the rail crossing, killing the citizen's 4-year-old son.

In the city of St. Johann in Tyrol in the Austrian region of Kitzbühel, an accident occurred at Eiger Crossing. The tragic news was first revealed by a Saudi relative of the deceased citizen who was riding the train from Kitzbühel to St. Johann.

The relative wrote on his Twitter account: “The father managed to get out with his wife and two children, then returned to get the child out, and when he returned to get his four-year-old from the vehicle, the train collided with it, resulting in their deaths.”

According to news sources, the Saudi man and his family were on vacation in Austria. Austrian police declared both the citizen and the youngster, who suffered serious injuries in the collision, dead.

Medical personnel tried to save the citizen's life, but he ultimately died of his injuries. After being taken to the hospital in St. Johann, the child died. Neither his wife, 34, nor their two other children, ages 7 and 11, were injured in the collision.