Only 30 Days Left For Correcting The Status For Violators Of Anti-cover-up System - Ministry Of Commerce
Category: Expats 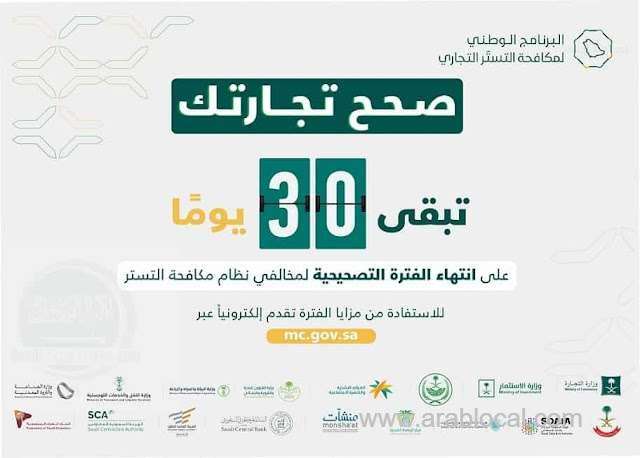 The Ministry of Commerce in Saudi Arabia announced that only 30 days remained until the end of the corrective period for violators of the anti-cover-up system.

The Ministry of Commerce provided a platform with the opportunity for those wishing to engage in economic activities including Saudi citizens and non-Saudis to correct their status, as per the regulation of correcting the status of violators of the Anti-Concealment Law.

- The deadline for the violators of the anti-commercial cover-up system to correct their status expires on 16th February 2022 (15/7/1443). Those whose status is corrected as per the regulations are exempted from penalties prescribed in the anti-cover-up system.

- The National Program to combat commercial cover-up called violating companies to quickly submit correction requests online and to take advantage of the corrective period of violators of the anti-cover-up system before 16th February 2022.

- The National program has clarified that this 30 days of corrective period is the last opportunity to correct their status, during which companies that violates the system, especially those whose annual revenues amount to 2 million riyals can benefit from this

- The National program warned the violating companies with legal penalties of up to 5 years in prison and a fine of up to 5 million Saudi riyals. Those wishing to correct their status can enter through the mc.gov.sa