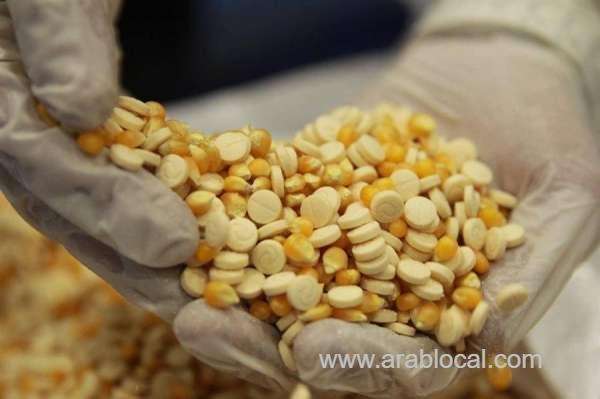 The General Directorate of Narcotics Control (GDNC) foiled a large attempt to smuggle amphetamine pills into the Kingdom of Saudi Arabia through a truck laden with corn via Al-Batha border crossing.

The official spokesman of the GDNC Maj. Mohammed Al-Nujaidi said that the continuous security follow-up of criminal network activities, which target to tamper with the security of Saudi Arabia and its youth, led to the thwarting of this bid.

In cooperation with the Emirati side and in coordination with the Zakat, Tax and Customs Authority and under a well-structured security plan, a total of 1,531,791 amphetamine pills were seized in possession of two people, a Saudi citizen and Syrian national, in Riyadh.

Maj. Al-Nujaidi said that preliminary legal measures have been taken against the arrested and duly referred to the public prosecution.

He stressed that GDNC personnel will be ready to deal with whoever violates the regulations of Saudi Arabia that bans smuggling, promoting and consuming all types of drugs, praising the cooperation with relevant security apparatuses in the UAE.