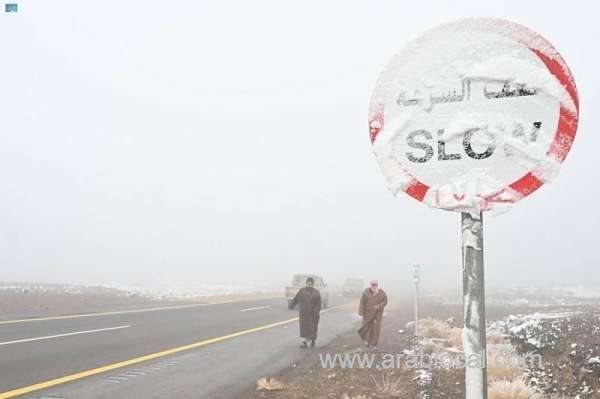 Several Saudi cities were witnessing on Friday a sharp drop in temperatures that has been unprecedented for many years. Mercury dropped to an average subzero three degrees Celsius in some cities while snow covered six northern cities.

The city of Turaif in the Northern Border Region recorded on Wednesday minus 6 degrees Celsius, which is the lowest temperature the Kingdom has ever witnessed over the past 30 years. On Friday, the temperature recorded in Turaif, near the border of Jordan, was minus 3 degrees Celsius while the mercury in the city of Qurayyat on the border with Jordan, dipped to minus 2 degrees. Similar was the case in Hail in the northern part of the country.

The winter will be the harshest during the weekend, with the capital city of Riyadh in the central region is expected to record freezing temperatures reaching minus 3 degrees Celsius, according to a report of the National Center of Meteorology (NCM). Extremely cold arctic air masses from Siberia are currently sweeping vast terrain of Saudi Arabia.

Hussain Al-Qahtani, spokesman of NCM, said that Saudi Arabia will witness a sharp drop in temperatures by the end of the week in the northern and central regions. It is expected that Riyadh will record between one to three degrees below zero, he said.

The low temperature, which reached 8 degrees at noon, did not prevent worshipers in Riyadh from heading to mosques to perform Friday prayers, but with taking their utmost precautions. The outdoor spaces in a number of cafés were found empty as the customers preferred to sit indoor adjacent to heaters.