Allowing entry of Saudi Nationals family members and their accompanying workers who have been in the suspended countries
Category: Saudi Arabia 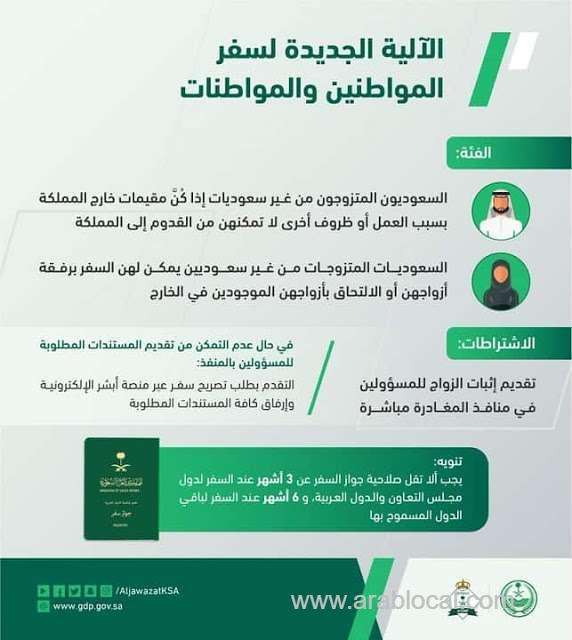 The General Directorate of Passports (Jawazat) in Saudi Arabia announced the required documents and conditions, in order to allow married Saudi citizens married to non-Saudis to travel through the ports.

Jawazat through its Twitter explained that for Saudis married to non-Saudi women, they are allowed to travel, if the wife is residing outside the Kingdom, due to the work or other circumstances that would not allow her to come to the Kingdom.

- As for the required conditions, they need to present proof of marriage to the officials at the departure points directly, and in the event that it is not possible to present these documents, then a travel permit application shall be submitted through the Absher electronic platform and attach all the required documents.

- In implementation of the high directives regarding procedures for traveling abroad and coming to the Kingdom during the period of suspension of international flights during the new Corona pandemic. Today, Jawazat announced the issuance of the Royal Decree approving to allow Saudi women married to non-Saudis to travel with their husbands or join their husbands who are abroad by presenting proof of marriage to officials at the departure points directly, as well as Saudi males married to non-Saudi women if they reside outside the Kingdom, due to work or other conditions that do not enable them to come to the Kingdom.