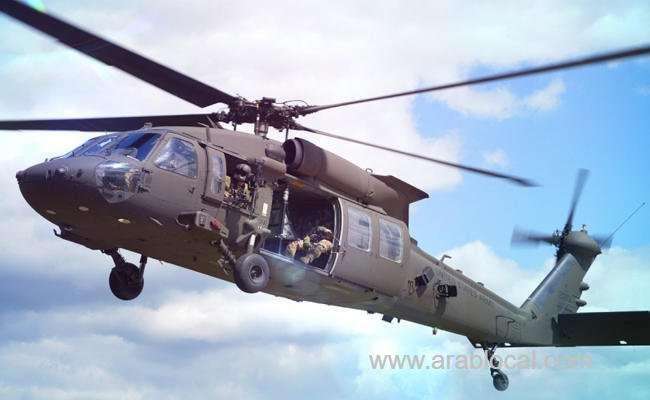 As many as 640 new technology jobs are being created in Saudi Arabia as a result of a joint venture between the Kingdom’s defense industry and the American defense giant Lockheed Martin to build Blackhawk helicopters with local employees.

The joint venture — known as Rotary Aircraft Manufacturing Saudi Arabia (RAMSA) — was signed as part of the big package of defense industry deals announced during US President Donald Trump’s visit to the Kingdom last May, but the number of jobs now envisaged is higher than first expected.

Alan Chinoda, the chief executive of Lockheed’s Saudi business, revealed the job creation package in an interview with Arab News ahead of the Armed Forces Exhibition for Diversity of Requirements and Capabilities (AFED), which opened in Riyadh on Sunday.

“We’ve created a joint venture to produce 150 Blackhawks in the Kingdom, which is a tremendous opportunity. It will create a whole new technology eco-system and will involve the transfer of technology as well as jobs. The infrastructure to support that in Saudi Arabia is good,” he said.

The deal to create RAMSA is just one aspect of an expanding relationship between the Americans and Saudi Arabia under the Trump presidency. There are also plans to develop the THAAD missile defense system, supply of new combat ships to the Saudi Navy, and finalizing of the Arabsat 6A satellite, which could be launched by the end of this year.

“There has been a change since the Trump visit. The business environment has picked up and has been a lot more cordial. It was a big thing for Trump to have his first foreign visit to Saudi Arabia,” Chinoda said. He emphasized, however, that Lockheed’s relationship with the Kingdom — in place since it supplied Hercules aircraft in 1965 — was not just about supplying expensive military equipment.

“We are looking for local partners across a diverse spectrum to work with us on our systems and programs. It is not just about selling. We want partners we can depend on and see this show (AFED) as the perfect opportunity to talk to potential partners. “There are some potential partners that can so support and assembly but we need to help get them up to the standard we require,” he said.

Lockheed, which has done business in Saudi Arabia for more than five decades, is partnering with the aeronautics arm of the Saudi Technology Development and Investment Company (Taqnia) on the RAMSA project for the Blackhawks. That deal has involved 10 young Saudi technicians being trained at Lockheed’s facilities in the US.

Lockheed has long-term relationships with Saudi Arabia’s Advanced Electronics Co. (AEC) on THAAD — Terminal High Altitude Area Defense — missiles and the Sniper 1 aircraft-born missile system, in one of the largest assembly facilities outside the USA, and has held talks with Saudi Arabian Military Industries, the new corporation set up to develop indigenous skills in the military manufacturing business.

It is also working on the PAC-3, the latest version on the Patriot air defense missile that has recently been used to counter hostile missile attacks against Riyadh and other places in Saudi Arabia.

The four new warships — described as “lethal and highly maneuverable multi-mission” vessels — were announced last year as part of a $28 billion program of deals during the Trump visit. The US Navy awarded Lockheed the contract to work on the ships for the Royal Saudi Naval Forces.

The Arabsat 6A satellite is the second to be developed for Saudi Arabia by Lockheed, and is described as the “most advanced commercial communications satellite we’re ever built” by Lockheed. The satellite has been assembled in the US and shipped to Lockheed’s facility in Sunnyvale, California, for final tests before a possible launch in 2018.

Chinoda, who has been with Lockheed in the region since 2011, said that there had been an improvement recently in the ease of doing business in the Kingdom. “With Vision 2030 and everything the Saudi government is looking at, they have been trying to assist the way we do business in the Kingdom, especially with things like visas, which are now much easier.

“The Saudi Arabian General Investment Authority (SAGIA) reached out to us to help us do business more efficiently. There is a definite momentum and a movement for positive change,” he said.